Every 21st June, there’s the “Fete de la Musique” in Berlin. But for years now, the “Nachttanzdemo (night dance demonstration) offers a different perspective on what music, and alternative culture means.

Superficially, it seems to boils down to a lot of loud music, mostly techno, and crawl-dancing for four hours on a route that normally would take you max 20 minutes by foot. Like every year, I wonder why – musicwise – it is mostly the “rave-oriented” scene which is represented. Other sub-sub-sub-cultures need their “Freiraume” (free spaces) and are as affected by the Gema as the rave-scene..

The amount of people triples or even quadruples during the demo because nobody expects it to start on time; it is twice as long because of the cops in front and in the back; the “spätis” (evening shops) along the route are doing the best business of the month: and following the cop vans, there’s another crowd of “flaschensammler” (empty bottle collectors), just as happy as the “späti” people.. (oh, and of course lots of tourists grabbing their smartphones to document another example of local culture). At least the “Lauti” didn’t run out of gas and had to be pushed (prolly because the sound systems should be kept running).

We dance on the Traveplatz (lovelingly sometimes renamed to Raveplatz) in the “Südkiez” against gentrification. Against the weird phenomena, how an “interesting” neighborhood attracts new inhabitants, who next protest and call the cops for exactly that, what made this neighborhood interesting in the first place: the music, the life on the streets & in the parks and the little self-run shops and pubs. Against Order and Regulations, which causes pubs to close, parks fenced off, live music banned, dogs leashed, or makes it “necessary” to visit an alternative pub with 12 cops to make clear that pub should hang a price list of the drinks on the outside.

We dance in the “Gefahrenzone”, the danger zone, where since january more than 1.000 people were controlled by the cops, “just because”. And again and again, house projects are invaded for, again “just because”. A good excuse is always to “protect the youth”. You know, there might be a 17 year old illegally drinking a beer without permission of his/her parents. That’s enough to be allowed to try to break into a pub, which already let the blinds down.

We dance over the Frankfurter Allee, and into Mainzerstraße, a street which used to be one block of squats, and next to a street where so-called investors try to chase the renters out by “renovating” or any other more or less legal way. The house of one of our regular guests of the foodsharing brunch is one of their latest targets, the people living there already organized themselves and will fight back, but the money and the resources are on the other side, and they’re very much aware of this. The first arrest takes place in the Mainzer. Why is unclear. Later on, I hear somebody was at the wrong place when a expensive car lost a bit of air in its tires. As if the person responsible for it would hang around..

We dance at the corner of the Boxi. Where more trouble starts, and the cops block the demo, but no one knows why. All we do is dance. There’s a fire show, and more people join the demo. By now, both sides of the demo are almost hermetically closed in by cops in full riot gear.

But we dance on. The live singer on one of the trucks starts rapping her frustration about the arrests, and next, the identification numbers of the cops making those arrests. The atmosphere changes slightly and becomes more grim. But we dance on.

We dance under a full moon over the Modernsohn Bridge, where a group of other alternative techno people just put a tent with drinks on the middle of the bridge to chill out, dance and look at that full moon. I pause to enjoy the sight, and hang to the side of the bridge, chatting with one of the “gabber” people of the bridge party people. We share a cigarette, and agree how beautiful the moon is. And though we might be on different ends of the spectrum of the alternative scene, we agree on the DIY mentality and the fun of spontaneous, unregulated things that just happen, because some people just had an idea, and made it come true.

We dance on towards the “Media Spree”, where the mainstream music industry established a bridge head. We dance to Gema-free music, and celebrate a culture, where sharing is more important than selling.

We dance because it’s our “Kiez”. To reclaim our streets. To celebrate our projects, our lifestyle. 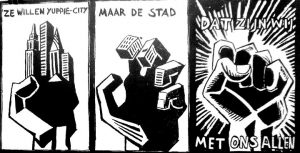 This is our Kiez. We are our Kiez. I look around me. I see the people from the foodsharing. From the house projects. The urban gardeners. The free shop. The senior hooligans of the Traveplatz. The people from the silk screen printing workshop or the hacker spaces. The straight-edge people of the vegan lunchroom, before vegan became hip. The collective bike repair projects (happily throwing a racing bike between them on the rhythm). The semi-homeless people of the Boxi park. The bee-keepers of a trailer camp. The independent sound system in a self-built transporter bike. The people who care more about their dogs then about themselves. The jugglers and acrobats of the children’s circus.

I hear at least 12 different languages, and see every skin or hair color naturally or artistically possible. I watch a muscular, deeply tanned, punk with a skateboard, dance next to small, skinny, grey-haired metalhead who keeps trying to do air-guitars to techno beats. Both completely covered in the golden glitter thrown around by a tall guy with a braided goaty in a flowery mini-skirt. The fat-bellied elderly Traveplatz alcoholic cheering with some teenage refugee girls, offering his beer, which is politely refused. A peroxide-blond bearded guy trying to keep up with his crutches gets help from some southern-europe technoheads full of piercings and tribal tattoos. The queers, the freaks, the losers, the weirdo’s, the bald heads, the dreads, the hairy ones, the bare-footed and the big-booted, we’re all represented here.. Without us, the Kiez would not be the same, and rather dull.

And we dance on.

To show, you can evict the houses, push the renters out, ban the music, clean the parks out, remove the street art, kill the guerilla gardens, regulate the pubs.

But you can’t evict the ideas, the dreams, and the willingness to make them happen..